Are you an ALD Family? Please click to Join our ALD Family Registry! 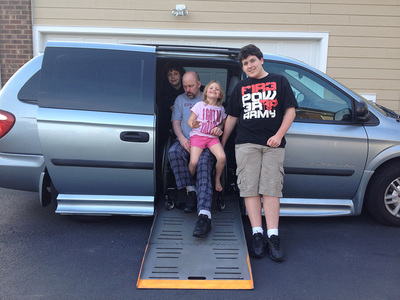 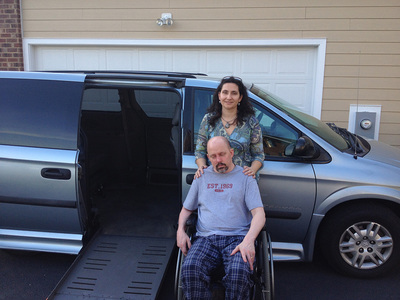 So here’s a quick run down of my husband, Jason…

When he was 17, he got really Ill, ( in hindsight, it was an Addison’s crisis. ) That’s when he was diagnosed with AMN.    Back then (1980′s) there was no Internet, so I only knew what the doctors at the time told him.   Our understanding was that he had AMN — which affects the spinal cord only– not the brain.    We believed this to be the case and went on with life– we figured that at some point in the future he may need a wheelchair, but we would deal with that when we had to.   Jason and I got married, he went on to earn a masters degree and a PHD in statistics.   He taught at the university level for 15 years, receiving tenure at his most recent position.   We never dreamed that AMN could ” change paths”.  About 5 years ago, Jason began to notice some visual changes.   They progressed quite rapidly and he has been totally blind for 2 years now.   His cognitive abilities are involved also.   Physically, it has been a downhill slide. He used to walk around using forearm crutches, now he is totally disabled and is in a wheelchair all of the time.   We have 3 wonderful kids. Stephen 15yrs, Chris 12, and Lindsey,  5 yrs old.

Recently Jason has had so much difficulty with transfers, that getting in and out of the car was taking its toll on me physically.   It just wasn’t possible to go anywhere anymore.    I began looking at wheelchair vans, as I knew this would be our only chance for any “freedom” from our home— not to mention needing to get to doctor appts.

Elisa, you were an angel that came with help right as it was needed! The van has made getting out of the house so easy and unstressful! We can never say Thank You enough.
​
—Carla and Jason Owen 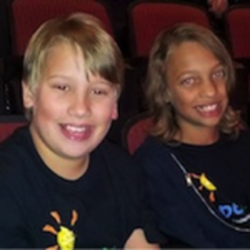 As you know, our expenses will continue to go up with extra doctor visits (gas and food on the go), expenses insurance won’t cover, doing fun things as a family and making memories while we still can, and eventually funeral expenses. Many friends have suggested I start this page to help us. I know that God will take care of all of our needs and that he uses his angels here on earth to do so. He proved that to me over and over again while Kip fought cancer over 12 years and finally healed him when he took him home 2/21/11. I somehow take comfort in knowing PJ will not only go to be with his heavenly father, but his earthly daddy too.

All that know me know how much of a miracle my boys are and I am honored and blessed to be their mom.

Thank you from the bottom of my heart!! Thanks for all of the prayers too, keep them coming. We will continue to need them more than ever. Love and hugs to all… EACH and EVERY day is a precious blessing. I pray God showers you with blessings!
​
—Janelle Wyrick Syverson
Adrenoleukodystrophy. ALD for short. What I would give to go back and never learn what this monster of a word means. I would give the world to live a day, even an hour without ALD in my life. But I can’t. ALD is a monster that doesn’t leave. Adrenoleukodystrophy enters innocent lives unnoticed, often until it’s too late for treatment and never leaves. There is no cure for ALD. But there is treatment. The only problem with that is many doctors wrongly diagnose patients because each patient’s symptoms can greatly vary, and are easily confused with other health issues.
After hearing the devastating news that Matthews Newborn screening test came back positive for ALD Matthews father and I also found out more information that will forever change our lives, this time for the better. Matthew was the 4th child in the United States to test positive for ALD through the Newborn Screening Program. Not because ALD is that rare but because New York was the first state to mandate ALD screening in newborns. And to make it even more shocking, the law took effect just 28 short days before Matthews’s birth. For a disease that is so rare in 28 days New York has already received 4 positive ALD infants. How rare? Only 1 in ever y 17,000 people have ALD.  Soon after learning of this, we learned why ALD was added to the New York newborn screening panel. We learned all about this little blonde curly hair, bright blue eyed boy named Aidan Seeger. Unlike Matthew, Aidan didn’t get tested for ALD as a newborn, and didn’t survive his fight against ALD. ALD may have won that battle, but the parents of Aidan fought on in Aidan’s name. So much in his name that “Aidan’s law” is the reason my 6 week old son has a chance to live a normal healthy life. Without the hours, the dedication, the fighting and the will to beat this monster that so carelessly stole their bright eyed little boy, I would still not know that that huge scary word Adrenoleukodystrophy means, but my little Matthew would still have it. Like I said before I would give anything to live a day without ALD constantly haunting my every thought and action, I am grateful that my son had the opportunity to fight his fight with ALD with the time and resources needed. Aidan’s law didn’t get passed because someone felt bad for the Seeger’s, Aidans law got passed because there’s no reason that any child shouldn’t have the chance Matthew has. Because ALD is treatable, if the patient has the key to lock ALD away forever. And that key is time. Matthew has his key to his fight; thankfully he was born in the right state. Sadly, so many more innocent children don’t have this chance. Won’t ever have this chance, without mandatory   ALD screening as part of the newborn screening panel.
Matthew may not be the first positive ALD test- but without a single doubt, he will not be the last. And until there is a cure there’s no excuse any human could live with as to why one babies life is worth being able to have the chance my son has and another baby doesn’t, just because of where he was born.
​
—Lindsay L. Hunter
#MATTHEWSMISSION
Read more: