Newborn screening does not diagnose diseases, but identifies which babies need additional testing to confirm or rule out these diseases. Although rare, such diseases are treatable if caught early.

Unfortunately, the number of diseases a child is screened for depends on which state they are born in. Due to an inequity in each state’s newborn screening program, children are not being diagnosed for many of these diseases. For children with these disorders, the earlier the child is diagnosed, the better chance the child has to survive.
​ 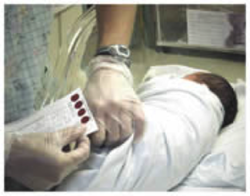 Currently, only 33 states and Washington D.C. are testing their babies for ALD.  It remains on the Recommended Uniform Screening Panel (RUSP), a list of disorders that the HHS recommends for states to screen as part of their state universal newborn screening programs.

New York State Newborn Screening Panel
When Elisa Seeger discovered there was a newborn screening test available for ALD and not one state was utilizing it, she decided this is where she needed to put all of her energy.  If her son Aidan and so many others were diagnosed at birth they could have been treated before they were symptomatic and still be alive today.  She made a promise to Aidan that she would have ALD added to the newborn screening panel in New York State, before the 1 year anniversary of his death. She started with her local Assembly member and Senator.

Assemblymember Jim Brennan and Senator Eric Adams both signed on to support her cause and created Bills for each house. At the same time, Elisa also started a petition to gain awareness and reached 20,000 signatures as well as being featured in the Daily News, Brooklyn Courier and segments on Channel 2 CBS, Channel 11 WPIX, and Cable Channel 12.

Unfortunately, since she had started the process in September of 2012, the legislators were not in session and neither the Senate Bill nor the Assembly Bill ever made it to Law. The good thing was this had laid the ground work for January 2013 and we had a new Senate Bill and a new Assembly Bill on January 1, 2013. As she knew she had only a 6 month window to make this happen she was in full force, making phone calls, writing e-mails and letters and scheduling meetings. She gained support of over 60 Assembly members and 25 Senators. Together, she and her new allies passed the Senate Health Committee and were working on Assembly Health Committee. Luckily, they were able to get ALD added to the budget and “AIDAN’S LAW” was signed on March 29, 2013, exactly 11 months to the day Aidan passed away and Good Friday.
​
Actual testing began on December 30, 2013 and in 30 days time New York State diagnosed 3 ALD positive boys and 1 girl positive for another peroxisomal disorder which would not have been picked up but for this test. These boys will now have the best chance at a healthy normal life through monitoring. Proof that newborn screening for ALD works and can save precious lives.  We will continue to fight at both the state and federal level until every baby is tested.

For more information on how to get started in your state please go to our Legislative Support Page.
Back to: What is ALD?